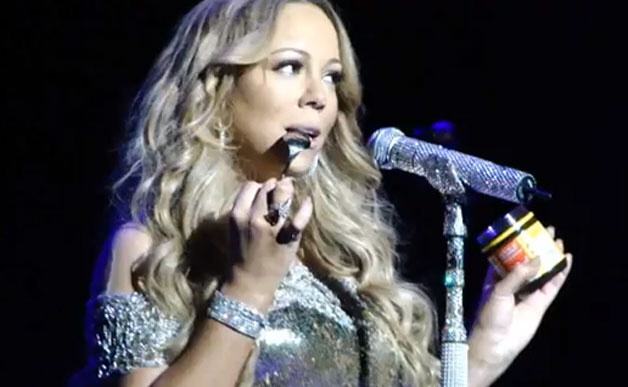 Footage has been released of Mariah Carey during her New Year’s Eve performance in Australia.  During her show she suffered a snafu.  In the middle of a song her earpiece monitor went out leaving her live on stage without guidance.

Reports say that the Diva knew that trouble was brewing early on during sound check when she asked the sound engineers to look at the earpiece.  She reportedly told them,

There’s like 200 of you, can one of you just fix the ear thing? I hope I’m not asking for the moon and the stars… there’s a lot of sound problems going on here. I don’t know if it’s me or you, or something in the air, but can we fix it?”

Ms Carey wasn’t just being a spoiled Diva, she knew what she was talking about.  In the middle of her show the earpiece monitor kunked out.

As the show continued, Mariah was forced to freestyle lyrics while the crew resolved the technical difficulties.

Showing why she is a professional, Mariah kept the performance going . She couldn’t exactly remember the lyrics so she started to do her own version.  With a voice like Mariah’s, she can pretty much sing anything and it would sound amazing and that’s exactly what she did.
She sung,

From the clip below you can see that the her fans loved it.  They clapped, cheered and laughed until she got things under control.  Let’s see Nicki Minaj pull that one off.

Here is the footage from the concert.