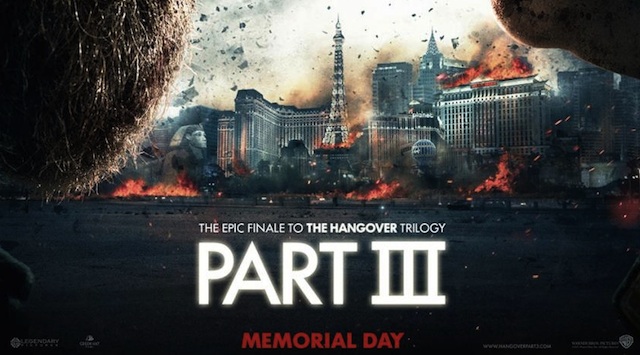 Movie Poster and Trailer Release for Third Installment of “The Hangover”.

If the movie poster for The Hangover Part III looks familiar, it’s because it’s a parody of the one for Harry Potter and The Death of Hallows: PartII.

I think the Hangover franchise has run its course and this movie poster basically confirms that.  Where the Harry Potter poster boasts the phrase, “It All Ends” at the bottom, The Hangover lists it at the top.

The poster was released on Twitter and shows Mr. Chow face to face in a death stare with Alan.  Although not as dramatic as Harry and Voldemort they do show Vegas in a blazing inferno in the backdrop. Other than the poster, there has been very little marketing of the film which is due to hit theaters on Memorial Day.  The first Hangover took in $467 million worldwide, making it the biggest original R-rated comedy ever….until Ted.  The Hangover II which is not considered an “original” comedy did even better than the first earning $581 million.  If the third one tops $600 million do you think there will be a 4?

Although that would be a good problem to have for the movie studio they won’t have to worry about that for two reason.  One, is that the long awaited Hangover II was a disappointment to most, and two, It’s flaw might be the Memorial Day release.  It will be going up against the sixth installment of Fast & Furious.  Good Luck.