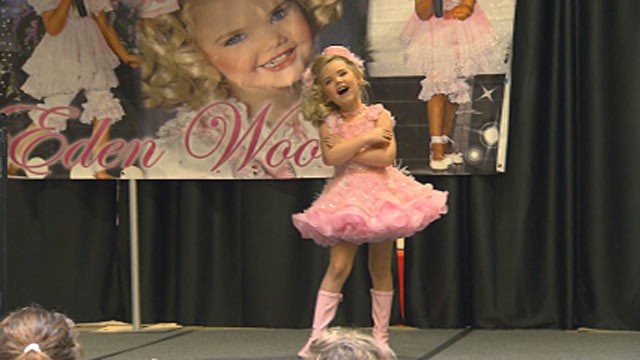 Well, we all knew that ‘Toddler & Tiaras’ was a horrible show that showcased poor children that had crazy ass moms. However, for the most part it seemed relatively harmless, right? While, the moms were obnoxious, star-craved and a bit controlling, they at least seemed to care for their daughters, a lot. However, Eden Wood’s mother Mickie Wood is now being accused of some alarming allegations in a new tell-all book written by a former manager.

The manager’s name is Heather Ryan and she released the book by self-publishing her own e-book, a method that is extremely popular in publishing these days. The book is titled, “Unleashing A Momster: A Look Behind The Curtain At The Tragic Life Of America’s Most Successful Child Pageant Star” I would just call it, “Unleashing A Momster” for short. The book claims that Eden Wood would receive verbal abuse from her mother, as well as physical neglect.

The former manager talked with Star magazine and revealed a few more details of the relationship between the mother and daughter. “Lying, jealous, demanding and evil to the core.” she said of Mickie Wood. She tells Star magazine that the mother would always put pageant competitions above anything else, including the health of her own daughter. She also states that the mom would make her drink Red Bulls and espressos to keep her energy up. All of the sugar from the drinks allegedly caused Eden’s teeth to begin to rot, however, Ryan refused to take her to the dentist.

On top of the insanity of giving a child Red Bull, it’s also reported that Mickie would make Eden practice for eight hours straight. When Eden messed up, Mickie would become angry and tell her, “You’re just like your father — he’s a loser.” and it’s claimed that she would even call her daughter a “little shit” directly to her face.

Of course, Mickie Wood denies these allegations and told Huffington Post the following,

“These allegations are untrue and I am very sad and disappointed that Eden’s former manager would be publishing such false and defamatory material.”

Well, for the sake of the poor child, I hope this is just a case of someone wanting their five minutes of fame. You would like to believe that Mickie wouldn’t be that horrible to her daughter, but you also wouldn’t be too surprised if she was indeed that horrible. I am sure we’ll hear more about these allegations soon.