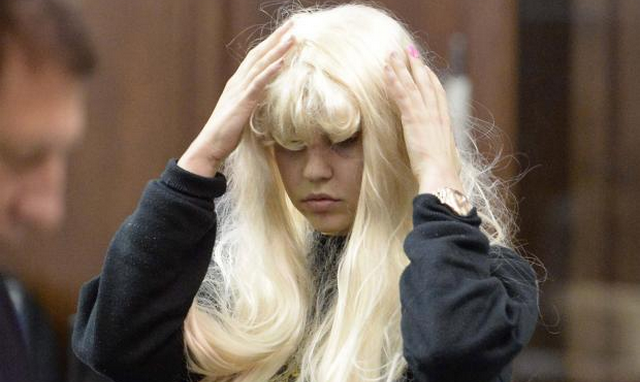 It’s only a matter of time before, “Bynes vs. Hilton” pops up on one of your pay-per-view channels. Amanda Bynes and Perez Hilton are in one nasty battle, and I think the only way to solve it is in a steel cage! CHAIRS, LADDERS…ANYTHING GOES! Okay, maybe I am taking it a bit too far, but the battle between Amanda and Perez is getting pretty damn nasty. Yesterday, the crazy actress (Amanda…not Perez) tweeted a very harsh message to the celebrity blogger.

“@perezhilton no one wants to suck your dick! Stop living! Kill yourself! I look soooo much better than the girl you hired to look like an awful cheeky version of me! So I’d say Fuck You but no one wants to! I just say keep living in your shitty existence leaching off of stars who you look, sound, and act nothing like!”

Hey now, Amanda. You have crossed the line here! I am sure there is SOMEONE out there who wants to suck his dick. Anyway, apparently Amanda is furious at Perez because he made a post about how someone on Twitter saw Amanda jumping on trampolines at Sky Zone in New York. Apparently, Amanda Bynes really hates trampolines or something because she seemed pretty upset about the whole thing…

“THAT’S NOT ME! I’m so sick of fake fans such as Perez Hilton! Send the picture to me privately first to confirm that it’s me! I’ve never been to Skyzone! That looks nothing like me! I don’t own a brown wig!”

Yeah, she doesn’t own a brown wig! How dare you think that she would grace that beautiful head of hers with a brown wig. That head deserves colors! Bright colors that really show off her inner beauty. Speaking of inner beauty, Perez better hope he has a lot of it because according to Amanda, he’s extremely ugly! The former sane person has called Perez ugly for a few months now, she’s even threatened to sue him! Not for being ugly, but we’re sure she would if she could.

The strange part about this? Besides the normal strangeness with any story about Amanda. The strange part is that Perez claims that he use to be best friends with Amanda. Perez told omg! Insider…

“The Amanda Bynes of today is repeatedly calling people ugly and is just lost. Now I don’t know for sure what’s going on, all of us can speculate, while I think there may be mental instability, obviously to me I think there are drugs at play. Amanda hasn’t been working for the last several years (she has) no reason or excuse to be sober. So, to me, she has just been on a really long high, allegedly, for a very long time with no comedown and she’s really lost touch with reality.”

I still think she’s playing some big joke on us, which in a strange way would kind of make her even more of a terrible person.