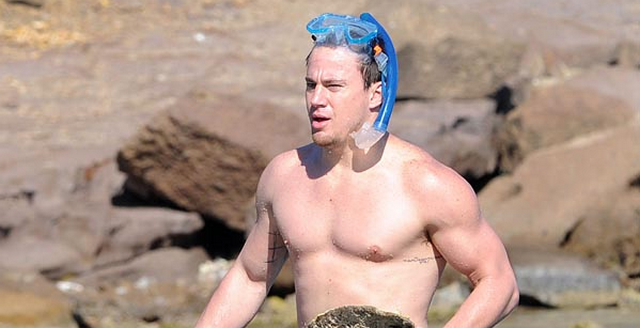 In Bed With Channing Tatum

It seems like every woman has a little thing for Channing Tatum. Just ask your wife or girlfriend, we’re sure that they will admit to thinking about him from time to time.

Well, Elle magazine just did a little interview with the hunky actor and titled the interview, “In Bed With Channing Tatum.” Sounds promising, huh? They first asked the 33-year-old actor to share an embarrassing childhood story involving a girl…

“The first girl I ever kissed was named Danica. She broke up with me through a friend who yelled–out the bus window–’Oh yeah, Danica doesn’t want to go out with you anymore.’ The whole bus burst into laughter.”

Ouch! I bet that Danica girl is kicking herself now. She could have been married to a big movie star and now she’s probably living in some small town, taking care of three kids while her husband goes out drinking every night with the boys. Such a shame, Danica.

The magazine also asked Channing about his first celebrity crush, “Alyssa  Milano in Who’s The Boss?” he answered. He then asked the interviewer if she was married, and the interviewer had to remind him that he was also married. But we all know that doesn’t matter in Hollywood! Getting married in Hollywood means something totally different than it does outside of Hollywood.

A particular charming/funny part of the interview came when they asked Channing what movie puts him in “the mood.”

“I don’t know if I have a baby-making movie. But every time we watch The Notebook, my wife looks at me while she’s crying and makes me promise we’re going to die together in bed. I’m like, ‘Can we not talk about how we’re going to die?’”

I’m not sure if that is incredibly sweet, or just incredibly creepy. I guess I’ll lean more towards the sweet side since they have been together for seven years. However, if a woman says that to you after the first night in bed, you better get your ass far away from her. She’s trouble.

As previously mentioned, Channing and his wife have been together for seven years. How have they done it? How do they keep everything fresh? Well, Channing says it’s all about communication…

“I wish I could say it was one thing. But I think communication and being brutally honest about things that you want–what you fantasize about, or whatever…No matter what, talk to each other. That stuff you might be nervous to hear? You gotta want to know.”

Interesting. You heard it hear first, guys. You want your relationship to last? Tell your partner about all your f–ked up fetishes.