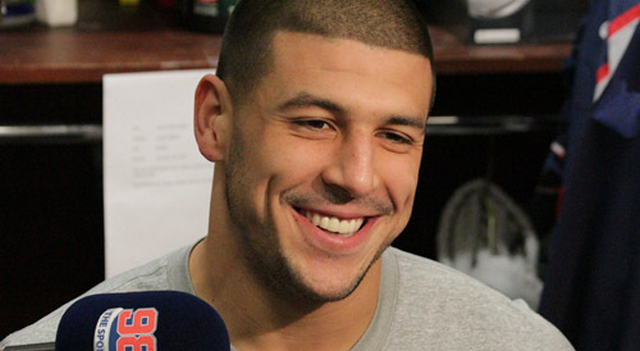 As most of you know, former NFL player Aaron Hernandez has been charged with first-degree murder and he’s probably going to face even more charges than that. He’s currently being investigated for other murders as well, so it’s safe to say that the dude is in a lot of trouble.

This news has caused his jersey prices to skyrocket online. eBay sellers are taking full advantage of this situation and are raising prices for the jersey. Believe it or not, some of his jerseys are actually selling for more than $1,500!

However, this seems to be an “online” only thing. Sports stores in New England are refusing to jack up the prices because they have morals, unlike most of the people on the internet.

The owner of “Sportsworld USA” told TMZ the following…

“We don’t want to make money off this incident. It’s what we consider blood money. We just want to get our money back.”

“I do not stand for what he allegedly did and wouldn’t want to profit off an individual who was murdered … Sports memorabilia is a dirty industry and this is one of the reasons why.”

I’ve never heard of the sports memorabilia industry being “dirty” before, but I guess it obviously can be. The owners of multiple stores did say that more people are coming in to buy Aaron Hernandez jerseys than ever before.

It’s just so strange how the world works, isn’t it? You murder someone and all of the sudden people want to buy all your sh-t.