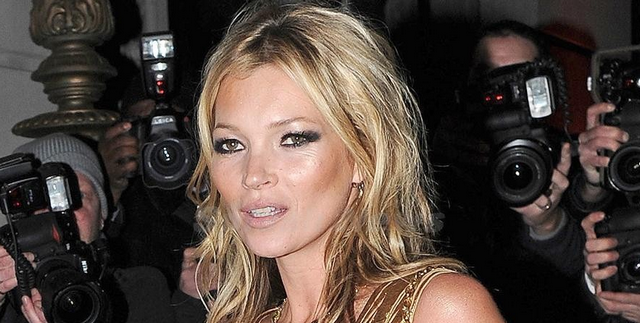 Everyone has always just kind of assumed that Kate Moss is/was a drug addict. She has also been connected with anorexia for most of her career, as well. However, the 39-year-old talked with Allure magazine and she claims she’s never done heroin and that she has never been anorexic!

She talked specifically about the criticism she received after her nude ad for Calvin Klein back in 1993,

“It was horrible, especially the anorexic thing. The heroin, I was like, ‘Oh, it’s ridiculous. I know I don’t do heroin. Just because I wear a bit of black eyeliner that’s smudged…’ But the anorexic thing was a lot more upsetting, to be held responsible for somebody’s illness. I wasn’t anorexic.”

Now even though she claims that she’s never been anorexic, there have been some signs that suggest she might be. Besides being extremely skinny, she’s also been known to give some controversial quotes in regards to her eating habits.

Back in 2008, she talked with Interview magazine and said the following,

“I didn’t eat for a long time. Not on purpose. You’d be on a shoot with bad food or get on a plane and the food would be so disgusting you couldn’t eat it. I remember standing up in the bath one day, I was so thin! I was never anorexic…I remember thinking, I don’t want to be this skinny.”

She’s also stated in the past that one of her mottos is, “Nothing tastes as good as skinny feels.” A quote you will find on many blogs and forums that support anorexia.

Does anybody really believe her? I mean she was caught doing cocaine back in 2005, are we really supposed to believe that is all she has done? Perhaps. Let’s let her have that one. However, I think she just needs to admit there was a time in her life where she suffered from anorexia. She is clearly just in denial. I hate the excuse, “There just wasn’t any good food!” Pleaaaaase.

You know what I do when I am really hungry and there isn’t any good food available? I EAT THE DAMN FOOD THAT IS AVAILABLE! Just be thankful you actually have crappy food to eat. Some people would love to have some crappy food on their dinner table.