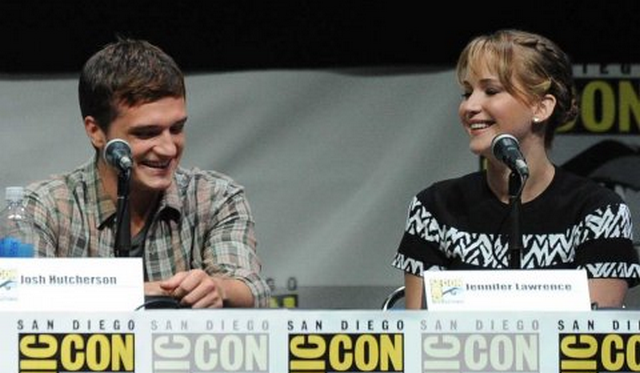 One might think that Josh Hutcherson is one of the luckiest dudes in the world. Not only does he get to make out with Jennifer Lawrence in the new Hunger Games movie, but he also gets paid millions to do it!

Sounds like the best job in the world, right? Well, it might not have been as awesome as it sounds. Jennifer Lawrence and Josh Hutcherson talked about the new movie during a panel discussion at Comic-Con this past weekend, and Jennifer revealed some pretty disgusting things.

She talked about how she was sick a lot during the shooting of the movie, which meant that Josh was getting a mouthful of snot during a lot of their kissing scenes,

“Oh my God, we should have brought the clip with the snot. I’ll put it on Youtube or something, you gotta see it…there’s all this snot coming out of my nose, and when I go to kiss Josh, it connects with his mouth. So, yes, it’ll be very hot.”

I don’t know about you, but I’d gladly take a mouthful of Jennifer Lawrence snot. I’d gladly swallow a few snot boogers of hers if it meant that her lips were pressed against mine.

Is that weird? I feel like that’s weird, but I can’t be the only one that would welcome the snot. It seems like the whole world is in love with Jennifer Lawrence. A number of celebrities have admitted to having a huge crush on the star. It’s clear that I am not the only one who wants some of that famous Lawrence snot.