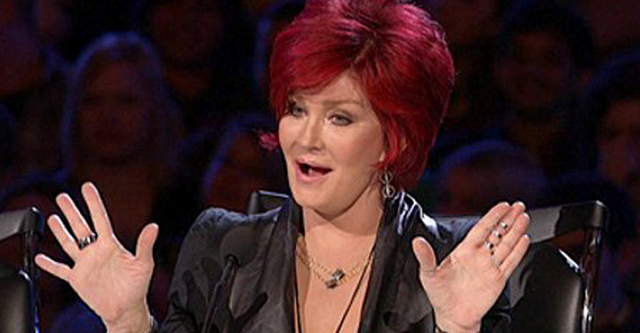 So, Sharon Osbourne was recently interviewed by the Daily Beast and some of the things she said during the interview are really raising some eyebrows.

The 60-year-old ‘talk show host’ was asked about how she felt about Kanye West and she didn’t hold back with her answer,

“He bores me. He’s an average-looking man with an average talent, but he’s a great salesman. He should sell cars because they would f–king fly out the door. He’s his number one fan.”

Really? Because I think Kanye West would be terrible at selling cars, it doesn’t seem like he enjoys interacting with other humans.

Anyway, Sharon Osbourne also gave her opinion on Justin Bieber and this is where things get a bit weird…

“He wants to be a mean boy. It’s like pissing in a bucket. It’s like, ‘Oh, we’re the bad boys!’ F–k off! You don’t know what bad is. I think that he’s lost, I really do. I think he doesn’t realize he’s white and not black, that’s a huge problem. And, at the point he’s at in his career, it’s do dangerous because we’ve seen it all before a million times.”

What does she mean by, “I think he doesn’t realize he’s white and not black”? Is she saying that only black people pee in buckets and smoke pot? I’m confused. Do you have to act a certain way to be black or white? I didn’t realize that the color of your skin made you act a certain way, that’s very interesting.

I guess I might as well just give up on being myself. I’m a white guy from Texas. I guess that means I should go out and buy me some cowboy boots and a horse. Maybe buy me a Confederate flag and put it outside my barn.

That’s what I am supposed to do, right? Yee-Haw!