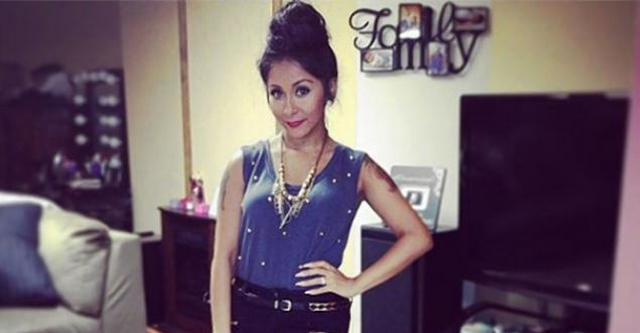 Snooki Claims Her Boobs Are “Disgusting”

Snooki might finally be happy with her weight now after losing a little over 40 pounds since the birth of her son. However, she still isn’t happy with two very important parts of her body.

The 25-year-old reality star admitted on an episode of ‘Bethenny’ that she really dislikes how her boobs look after giving birth,

“My boobs are disgusting! My boobs are hanging. My boobs got so big. You can’t see now because I have a bra—I have a Victoria’s Secret Wonder Bra on–but when I don’t, they just sag and it’s like skin, so I am thinking of getting a boob job maybe.”

The host of the show, Bethenny Frankel admitted that she has had both breast implants and a breast lift, “You’ve got to get the lift.” she told the Snookie monster.

Snooki also told Bethenny that she wants four babies and is looking forward to being the crazy mom at the grocery store who is yelling at her kids to behave.

I’m not sure if the world can handle three more little Snooki’s running around. I mean, eventually her kids will have their own kids and the amount of Snooki’s will just continue to multiply!

THERE WILL BE SNOOKI’S EVERYWHERE! IT’LL BE MAYHEM, I TELL YA! MAYHEM!