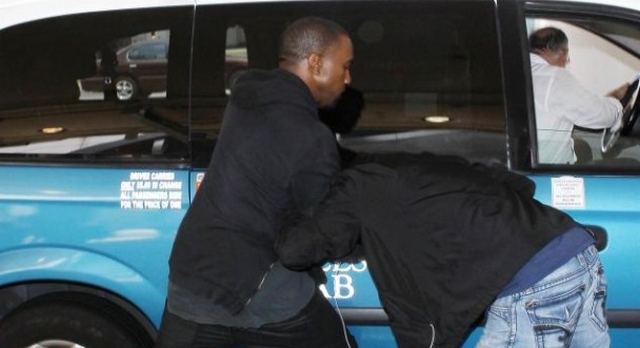 We’re sure you all remember the video of Kanye West “attacking” a photographer outside of LAX Airport.

If you don’t remember it or happened to miss it somehow, you can view the video down below to refresh your memory…

As you can see, it was hardly a true “beatdown” but the 36-year-old rapper was still charged with battery and grand theft for the incident involving photographer, Daniel Ramos.

Kanye could face up to a year in jail if he is convicted, but he claims he is innocent because it was all in self defense. According to court documents filed by his attorney, Kanye felt like his safety was in immediate danger.

He also claims he was just doing what was, “necessary for his self-defense and safety and was justified in doing those acts.”

Obviously, it didn’t appear that his safety was in any danger. We’re not sure how that defense is going to hold up in court. However, it is a little ridiculous that he is being charged with this crime. Yeah, he shouldn’t have gone after the guy like he did, but he didn’t even hit the dude!

All he did was grab his camera and then the paparazzo went off running like he had just been attacked by an elephant or something. It’s not surprising that the photographer is also suing Kanye.

We’ll see how this all plays out, but it’s hard to imagine Kanye doing serious time for this incident. Someone needs to tell this Ramos dude to man up.