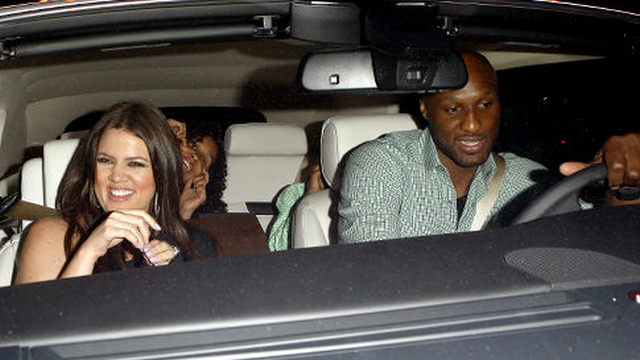 According to several sources, Lamar Odom went back to the home he once shared with Khloe on Tuesday afternoon.

He wasn’t moving back in or anything, sources claim he was just there to have a serious talk with Khloe. A photographer who was on the scene told X17 Online the following,

“When Lamar left the house, he was kind of out of it. He didn’t look happy and he looked really tired, like he hadn’t slept all night.”

TMZ is reporting that Khloe demanded Lamar to get help for his addiction or else their marriage would be over. She is apparently not a fan of his “self healing” method, and who can blame her? It doesn’t exactly look like it’s working.

And get this, one source is claiming Khloe actually found a pipe and a stash of crack in a baggie on Lamar. She reportedly flipped out when she found it and told Lamar that she was “done” with him.

To make matters worse, Khloe is getting pressured by her family to make a decision. Kim Kardashian is supposedly confused as to why Khloe is even still with Lamar,

“Khloe was at momager Kris Jenner’s house, and Kim just lit into her about how much Lamar was hurting their bottom line and creating so much negative publicity. Kim can’t understand why Khloe hasn’t dumped Lamar because he is showing absolutely no desire to go to rehab.”

This has to end in divorce, right? It just seems inevitable. It certainly doesn’t seem like Lamar is willing to get help, and Khloe Kardashian will eventually get tired of it all. It’s just a matter of time, folks. Place your bets now.