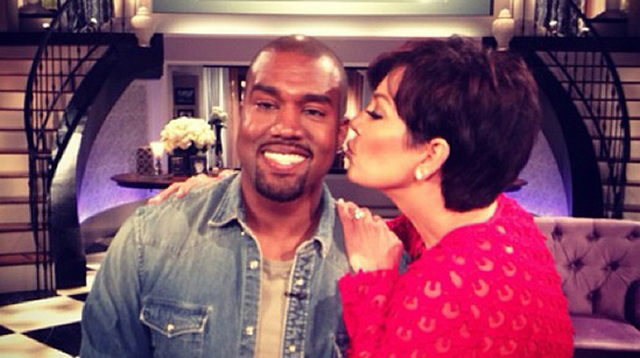 Kanye West might come across as a huge prick to just about everyone in the media, but Kris Jenner thinks he is the best thing since sliced bread.

The mom/manager of Kim Kardashian sat down with Ross Matthews and talked about several different things. She talked about all of her kids and praised Khloe Kardashian for being such a strong woman.

And then she talked about how magnificent Kanye West is,

“I love him so much, and he’s such an amazing boyfriend to Kim and a great dad and a wonderful person. He’s creative and he’s an amazing, amazing human being, he really is.

He doesn’t always do interviews and get the chance to really express himself, so I was really glad that I got a chance to sit down and talk with him.”

Is it just me, or does it sound like she is being forced to say these things? No, I’m sure she is really being sincere. You can tell Kanye is a really sensitive guy, so he probably is a pretty good boyfriend. I’m still not convinced about the “amazing human being” part, though. I think I’ll need a little more evidence on that one.

Kris also talked about Kim and Kanye’s trip to Paris,

“It was so much fun. It’s just a really delicious time with those kids…and she’s just the best mom in the world, they’re really great parents.”