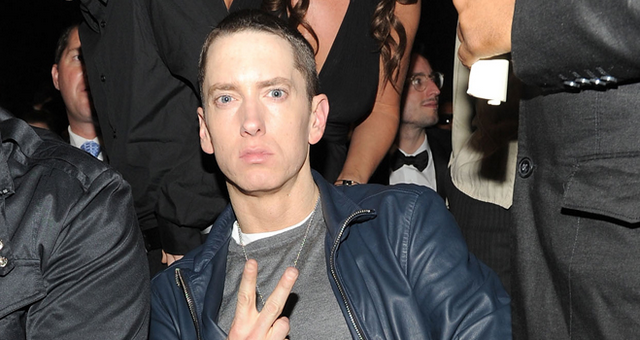 Eminem has been rapping about his daughter Hallie since the day she was born. Even though she has mostly stayed out of the spotlight, it still feels like we all know her through his songs. It’s believed that Eminem was on hand for the whole thing, but he stayed inside the school during the ceremony. A parent of a student at the school told the Macomb Daily the following,

“Hallie came out with her mother Kim when she was introduced with all the other kids but her father watched from inside the school because he didn’t want to cause a scene — he wanted Hallie to have her own moment.”

How sweet of him. Apparently, his daughter has grown up to be quite the student. People say that she is an incredibly smart and athletic girl. It’s hard to believe she turned out so normal when you consider the relationship her mom and Eminem had, but it seems like Eminem makes sure he always puts his daughter first.

Well, congrats to Eminem! Hopefully this joyous occasion will make it on his next album…I can see it now.

“Hallie, man, I love her

How could I make something so perfect?

It just doesn’t make sense to me

How could my little girl grow up to be homecoming queen?

BUT SH-T, I WANT TO KILL MYSELF! ALL THESE THOUGHTS IN MY HEAD

THEY EAT AWAY AT ME WHILE I SIT IN MY BED

THE FAME, THE DRUGS…EVERYONE IS OUT TO F–KING GET ME

I AM THAT BIG PRESENT UNDER THE CHRISTMAS TREE

WELL OPEN ME…YEAH GO ON AND OPEN ME

RIP MY SKIN OPEN AND PULL OUT MY INSIDES