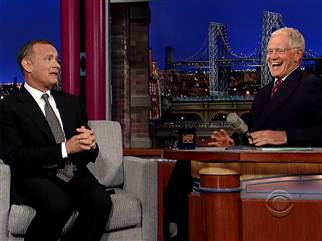 The great Tom Hanks was on the “Late Show” the other night and he revealed some pretty shocking news. The 57-year-old actor told Letterman that he had been dealing with high blood sugar numbers for the past twenty years and that his doctor told him the following,

Hanks brought up the subject because Letterman commented on how much weight he had lost. And while he did admit to being thinner and a bit healthier, he said there is no way he could get back to his high school weight.

He’s certainly not the only celebrity to be diagnosed with diabetes and he won’t be the last. It’s just a good thing that he seems to be taking it seriously. We have to keep that man healthy, there is no way that Forrest Gump can die anytime soon. It just wouldn’t be right.