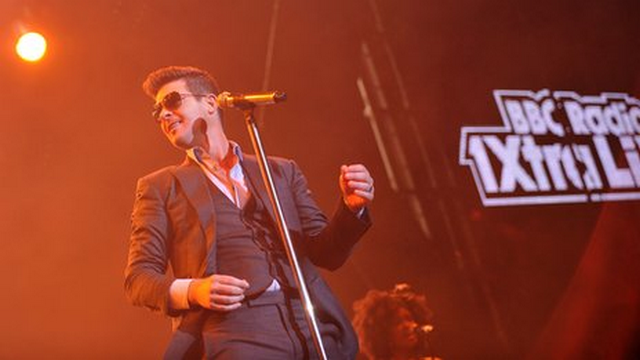 Robin Thicke Claims ’Blurred Lines’ Is About WHO?

We think most people agree that Robin Thicke is a little bit creepy. He’s not Gary Busey or Charlie Sheen creepy, but he definitely has a creepy vibe to him.

That creepy vibe only strengthens when you really listen to, ’Blurred Lines.’ The song where he claims that he knows “she wants it.” We’re not sure how he knows she wants it, but now we do know the song is for his wife, at least according to Mr. Thicke.

“I wrote it (Blurred Lines) about my wife. She’s my good girl. And I know she wants it because we’ve been together for 20 years.”

Oh, Robin. Do you think anybody actually believes you? Let’s just breakdown some of the lyrics for a minute, and see if this creepy song really could be about your wife.

“Ok now he was close, tried to domesticate you
But you’re an animal, baby, it’s in your nature
Just let me liberate you
Hey, hey, hey
You don’t need no papers
Hey, hey, hey
That man is not your maker.”

Hm, interesting. It certainly sounds like this woman is with another man, right? Is his wife seeing another man? Or maybe he has multiple personality disorder, and one day he’s trying to domesticate her and the next he’s trying to liberate her.

That must be it. It all makes perfect sense now.