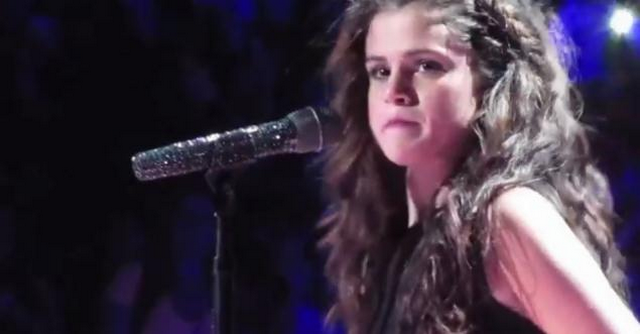 Selena Gomez In Tears While Singing Song About Justin Bieber

Is Selena Gomez still not over that douchebag Justin Bieber?

TMZ reported the other day that Selena Gomez was sobbing on stage during her performance of, ‘Love Will Remember’ which is a song about her ex-boyfriend, Justin Bieber.

Many people assumed that her mini-meltdown on stage was due to Justin Bieber. However, it turns out that wasn’t the case at all! Selena Gomez explained why she was crying on stage after the show on her Twitter account.

The 21-year-old posted the incredibly sad looking picture you see down below with a caption that read,

“Never ended such a beautiful show in tears because they wouldn’t allow me to Instagram tonight. Completely heartbroken and pissed. Thank you SO much Brooklyn. I’ll be stopping outside Letterman tomorrow to make it up if you can make it. I love you guys more than you know. Promise.”

That’s right, she was crying because she wasn’t allowed to Instagram! While this might sound like an overreaction to most sane people, it is kind of a big deal to Selena. She has a long tradition of taking pictures with her fans after her shows on tour. So, she really felt like she was letting a lot of people down that night.

Dammit, we said no crying!