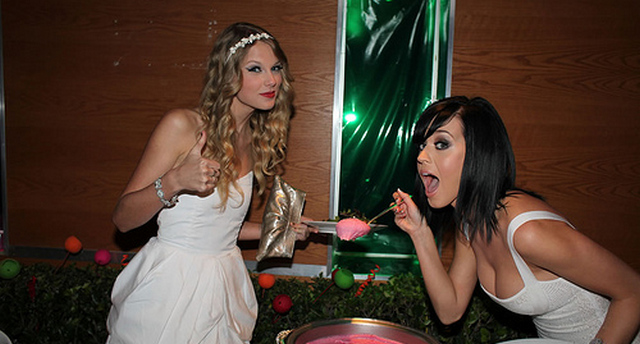 We all knew Katy Perry was a little strange, but this story takes her strangeness to a new level.

Katy sat down with Mario Lopez at a release party for her new album, ’Prism.’ And during a Q&A session at the event,  a fan simply asked Katy what she keeps in her purse.

“One of the first times I went to the Grammys, I got to share a dressing room with Miley Cyrus and Taylor Swift. And I asked for a lock of their hair from each one of them, which is totally creepy, but awesome.

I put little bows on them individually and put them in my purse. And that was my little secret and I’m a freak!”

What? Just asking for a piece of their hair is weird enough, but she took it too far when she actually put bows on them. Who the hell does that? She better be lucky that this was back when Miley Cyrus still had hair to cut.

Maybe she is planning on making a Taylor Swift/Miley Cyrus clone. She’ll call the creation, “Miley Swift”, and “it” will be the first twerking country music star. Can you imagine? Miley Swift would probably take over the world.