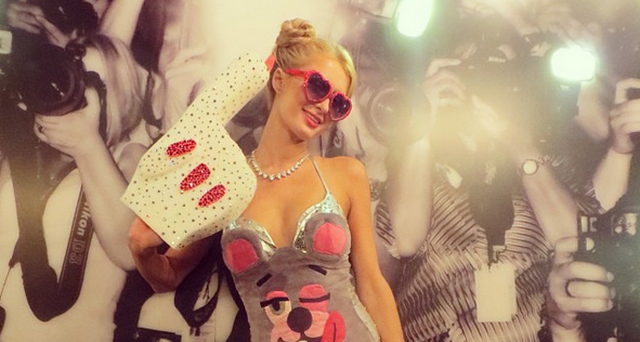 Well, the lovely Paris Hilton was invited to the big party at the Playboy mansion this past weekend and she really went all out for her costume.

The 32-year-old posted the horrible photo you see down below on her Instagram account with a caption that read, “Twerk or treat.” As you can see, she’s dressed up as Miley Cyrus. This is bad for two reasons. The first reason is that the costume is terrifying and should be globally banned. The second is that this is only going to feed Miley’s ego. She already thinks she is the best thing since crustless bread. This is only going to make her love herself even more than she already does.

Paris wasn’t the only one making poor decisions. Check out this horrifying photo of Hugh Hefner and his wife… What the hell is going on? Please make it stop, I am dangerously close to ripping out my eyeballs. By the way, we should mention that Hugh was planning on going as himself for Halloween, but he was apparently scaring too many of the guests. They actually thought someone had dragged a corpse inside the building.