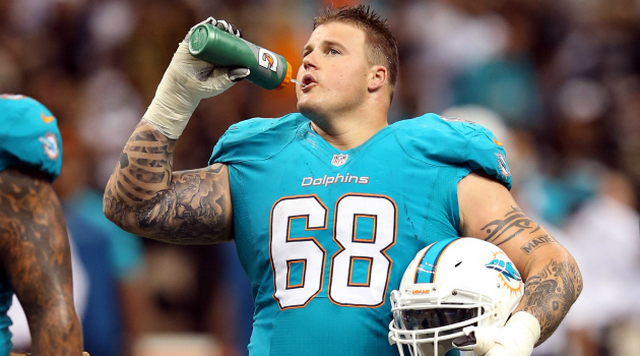 We always knew football players were filled with rage, but this video of Richie Incognito at a pool hall in Florida is quite disturbing.

The video you see down below was obtained by TMZ and it shows the Miami Dolphins lineman at his worst. He’s shirtless and appears to be completely wasted. Honestly, it looks like he’s about to eat somebody for dinner.

At the beginning of the video you can hear him yell, “MIKE POUNCEY, N*GA!” Mike Pouncey is also a member of the Dolphins and it appears that Richie is announcing his entrance in a very offensive way…

Pretty scary, right? Well, this video was actually filmed several months ago. Richie was suspended by the Dolphins for harassing another teammate by the name of Jonathan Martin. He allegedly sent him a nasty voice mail in which he called him a “half-n**ger.”

Geez, it’s like he turns into the Racist Hulk when he drinks. Instead of turning green, he turns completely white and a hood magically appears on his head.

Let’s hope he cuts back on the drinking.