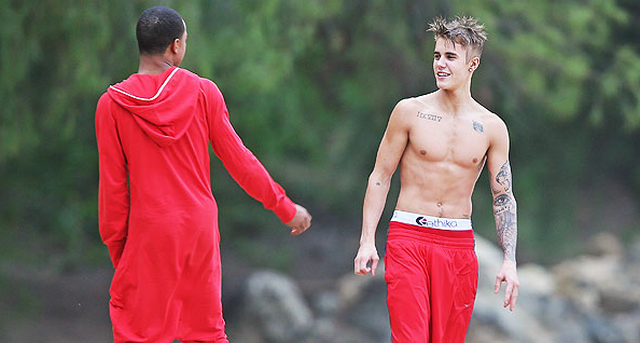 A bodyguard for Justin Bieber was somehow arrested in one of the most tranquil places on Earth, Hawaii.

Dwayne Patterson was arrested a couple of days ago in Hawaii after assaulting a 29-year-old photographer in Hawaii. The 19-year-old singer was apparently jumping off cliffs at the time the pictures were being taken.

Patterson didn’t like this, so he approached the dude and demanded that he delete all the photos. The photographer refused to do it and that is when the bodyguard turned violent. He says that Patterson got “physical” with him and damaged his camera.

The bodyguard was booked on 3rd degree assault and 4th degree criminal property damage. He was released a short time later on $3,000 bail.

We’re assuming that Bieber paid for his bail, at least you would hope so. The dude goes around and protects the douchebag 24/7, the least he could do is cover the bail. It’s not like $3,000 would hurt him or anything. He drops more than that during a slow night at the strip club.

Hollywood’s drama is starting to invade Hawaii. They’re going to ruin the only peaceful place left in America.