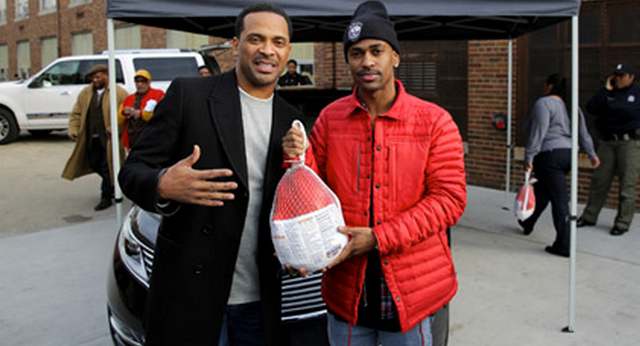 Big Sean and Mike Epps Hand out Turkeys to the People

It’s the day after Thanksgiving and we’re all probably uncomfortable from stuffing our face with turkey and pie. Most of you are probably off work today, which means your happy a** won’t be getting off the couch all damn day.

Well, while you’re sitting on your couch, Big Sean and Mike Epps are doing work. At least, they were a couple of days before Thanksgiving. Big Sean was in Detroit this Tuesday handing out over 650 turkeys to families in need in Detroit. He didn’t just throw down some money and leave the place, he actually got in there and passed them out to the people.

And he also donated over 100 hams to the Detroit area through his charity. As you can see in the photo, Mike Epps even stopped by to help pass out the turkeys. The efforts of Big Sean, Mike Epps and all the volunteers provided over 30,000 meals for families around the area. Doesn’t that just warm your heart? It’s nice to hear stories like this after Thanksgiving, and not stories about some crazy people running each other over at Walmart for a TV.

Let’s all shake our head together.