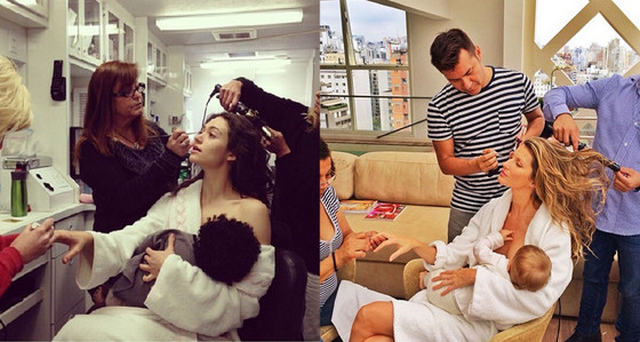 It might just be puppy love, but I think Emmy Rossum is my new favorite person in Hollywood. After posing for some incredibly sexy photos in Esquire magazine, the 27-year-old showed off her sense of humor by mocking Gisele Bunchchen’s viral breastfeeding photo.

In case you haven’t seen it by now, take a look at the “controversial” photo Gisele posted to her Instagram account just a few days ago.

She captioned the photo with, “What would I do without this beauty squad after the 15 hours flying and only 3 hours sleep #multitasking #gettinrready”

Of course, the photo went viral and some people had a problem with it. However, most people agreed that the picture shows just how committed she is to being a mom.

Anyway, let’s get to the beautiful and talented Emmy Rossum. She was on the set of her show ‘Shameless’ yesterday, getting dolled up by her hair and make-up team, just like Gisele was the day before.

Like I said, I’m pretty sure she is my new favorite person. I’m going to watch all of her movies this weekend (except for The Day After Tomorrow…I don’t like her THAT much) and then I’m going to catch up on Shameless.

We’ll see if I still feel the same way about her next week.