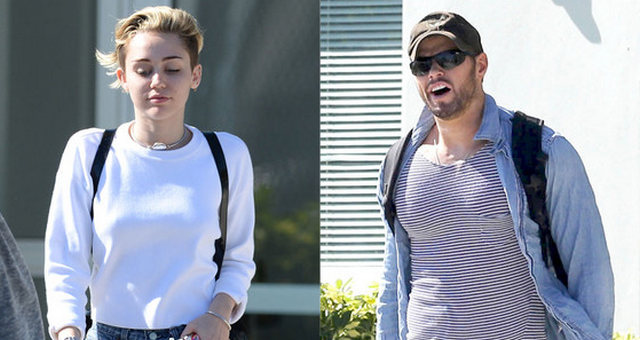 Are you ready for another round of, “They were spotted within five feet of each other, so they have to be f–king!”?

Miley Cyrus and Kellan Lutz were seen getting off the same private plane in Miami on Wednesday afternoon. They did not exit the plan together, but they did both come from the same plane.

As you can see from the photos down below, Miley Cyrus was wearing some cutoff shorts, and Kellan Lutz was rocking one ugly looking hat,

Of course, rumors started after the pictures were released online. Apparently, if you ride on the same private plane together, you have to be hooking up with each other. It’s just how the gossip world works.

But Kellan Lutz claims there is no truth to the silly rumor. Just yesterday, the paparazzi flagged him down on his way back to L.A. and he had this to say about the rumor,

“You guys are stupid. No, I’m happily single. I am very focused on work.”

Whatever, Lutz. We’re onto you, okay? No one goes on a private plane with someone they’re not dating. You know where I got that information? The gossip magazines, and we all know they never lie to you!