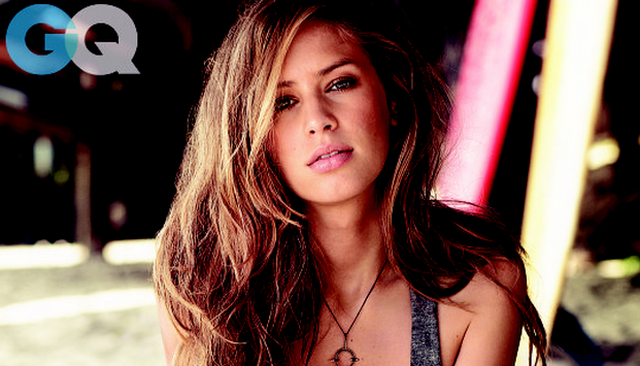 When I woke up today, there were only two things I knew about Sean Penn. He is a very talented actor and his face kind of looks like a hobbit.

But today I learned another thing about Sean Penn. Apparently, he has an extremely hot 22-year-old daughter named Dylan Penn. And his extremely hot daughter is working on being a model, and that’s just wonderful news for everybody.

The gorgeous 22-year-old posed for the sexy picture you see down below for GQ magazine. I’ve never wanted to be a sandy beach before, but now it doesn’t really look like that bad of a gig. The only bad news I could find about this girl is the fact that she might be dating Robert Pattinson. That damn vampire and her have apparently been spending some time together recently. Back in September, they were seen hanging out together at Chateau Marmont in Hollywood. And then a month later, they were back together for a private party at another Hollywood hotel.

However, Dylan tells GQ that the rumors are bullsh-t,

“We’re talking about Rob here? … That’s been very foreign to me. But actually kind of funny, because it’s all bulls–t.”

That’s good to know. I mean, I still have no chance of actually dating her, but at least now I can fantasize about it without feeling guilty.