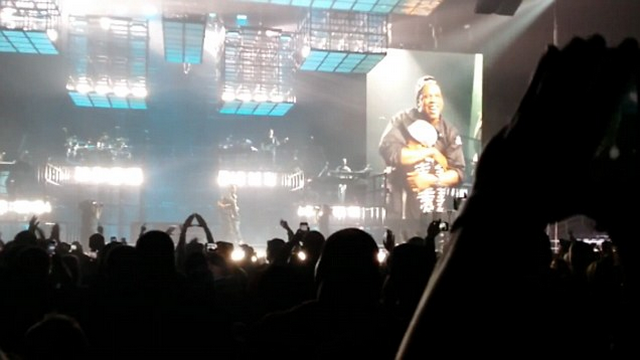 Jay Z and a 12-year-old rapper had a pretty magical moment on stage this past Sunday. The surprise rap performance took place in Greensboro, N.C., during Jay Z’s Magna Carter World Tour.

The 44-year-old rapper pulled a 12-year-old kid on stage named Justin and handed him the mic. And the kid didn’t disappoint, he shocked Jay Z and the audience with his raw talent.

Check out the video below,

He killed it, right? You can tell Jay Z was shocked by the whole thing. The kid’s performance was so good that people started questioning if the whole thing was a set-up.

However, the mother of the 12-year-old talked to TMZ and confirmed that it was all real. Apparently, she had purchased tickets to Jay Z’s concert in Charlotte the day before, and her son was devastated that Jay Z didn’t notice him then.

So the mother decided to surprise her son with front row tickets to the concert the next night, and that’s when Jay Z noticed Justin with his sign. She told TMZ that they got to meet Jay Z backstage for a few minutes after the show, but no numbers were exchanged.

What a great story. Hopefully this gives the kid the motivation he needs to keep his dream alive. Maybe he’ll become the next Jay Z one day.