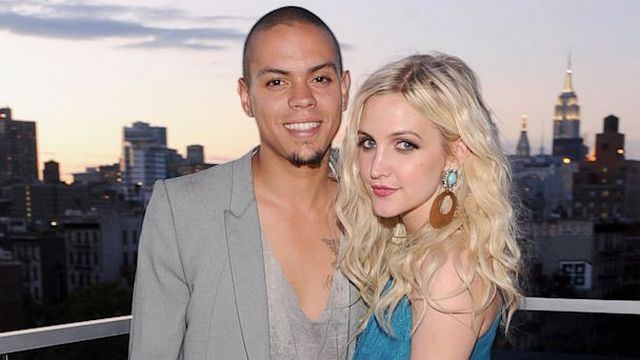 Ashlee Simpson and Evan Ross are officially engaged. The 29-year-old singer announced the surprising news on her Twitter account yesterday.

This will be Simpson’s second attempt at love. The singer’s previous marriage to Fall Out Boy’s Pete Wentz ended with divorce back in 2011. Simpson and Wentz do have a 4-year-old son together named, Bronx.

Like we mentioned above, Simpson broke the news on her Twitter account. She posted the photo you see down below, with a caption that read, “My baby love and I are ENGAGED!!! Hallelujah Hawaii !!!!!” They sure do look happy, huh?

Simpson and Ross first went public with their relationship back in July of last year. And back in November, Ross (who will star in the final Hunger Games movies) spoke highly of Simpson. He told Omg! Insider that Simpson is “The One” and that he definitely could see marriage being in their future.

“It’s amazing. I’m so in love and we’ve got amazing things going on. And we inspire each other.”

Well, good for them! Let’s hope they start taking better pictures together. That photo above looks like one of those photos you see on Dateline NBC.

“They were a happy couple, celebrating their engagement in Hawaii, when things took a turn for the worse. 25-year-old Evan Ross’ attitude changed after he noticed Simpson flirting with a local in the surf shop. What happened next…no one could have seen coming.”