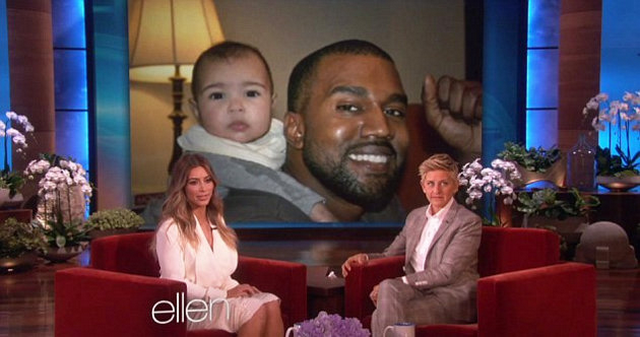 Kim Kardashian just filmed an interview for the ‘Ellen‘ show that will air later today and during the interview, she shared two adorable photos of North West.

But before she showed the pictures, she talked about how romantic Kanye West is. She talked how surprised she was when he proposed to her on the baseball field,

“So when we got there, and we pull up, and we’re in this baseball field, honestly, that’s something Kanye would do just if he felt like it for one night even if it wasn’t my birthday.

He’s the most romantic guy I have ever met. He is better than any movie, like, romantic novel, like, he is … so amazing. I truly was surprised.”

We’re just going to take her word for it. It’s Friday and I really don’t feel like arguing about how romantic Kanye is. Anyway, she also hinted that they are planning on getting married “somewhere out of the country.”

And then she started talking about their adorable daughter, North West. She admitted that the pregnancy was really hard, but it was all worth it.

Check out the adorable pictures she shared down below… How did those two idiots make something so adorable?