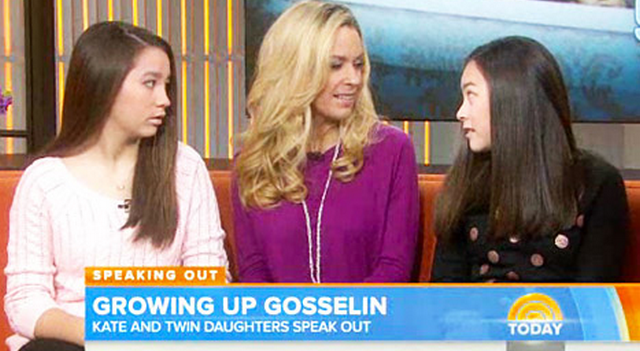 Kate Gosselin brought her two daughters on the ‘Today‘ show Wednesday morning and the interview was completely awkward. The whole point of the interview was to show the girls were “normal” and that the media was making up lies about their family.

However, the interview just added more fuel to the fire. The two 13-year-olds were supposed to talk about how normal their life was during the interview, but they ended up letting their mom do most of the talking for them.

When the host of the show asked the girls how their family was doing, they both shut down and didn’t say a word. As you can imagine, this pissed off Kate, “Mady, your words. It’s your chance. Spit it out!” She told her daughter.

Check out the awkward interview down below,

Obviously, Jon Gosselin wasn’t happy about this interview. And what does Jon do when he’s unhappy about something? He talks to the media about his problems! What else would he do?

The 36-year-old told Hollywoodlife.com the following,

“I think out of fear, they went silent. They were never scripted before, it was a reality show — do what you want, say what you want. They were in a moral dilemma. All the stress got to them and they didn’t say anything. I’ve just never seen them not talk. I was like, ‘Holy cow.’”

He then turned his attention to the woman he hates most, Kate Gosselin.

“I think it’s f—ing horrible that she’d put them in a [position] like this. She put them on TV for herself. She’s narcissistic. They haven’t been on TV in two years, so why are they speaking out?

I care about my children and I am worried about them being normal kids. I’ve worked so hard to get them off TV and now she throws them back on TV.”

The situation is just f–ked up. They have two parents who are completely insane and then they have the media who just eats this sh-t right up. Why else would the ‘Today‘ show want to interview them?

Let’s just hope their parents haven’t screwed them up too much.