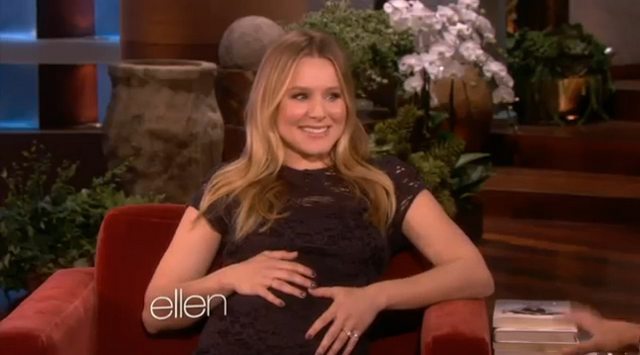 Kristen Bell Opens Up About Her ‘Onscreen Threesomes’ While Pregnant

Nothing quite gets the mind off Justin Bieber like hearing the word, “threesomes.” The adorable Kristen Bell was on ‘Conan‘ the other night and talked about how she had to perform sex scenes while seven months pregnant.

So, what are these sex scenes she is talking about and where you can watch them? Well, she was filming the popular Showtime series, ‘House of Lies’ and the script called for a raunchy sex scene with her onscreen boyfriend, Adam Brody.

No big deal, right? They’re professionals. Well, there was one thing that kept getting in the way. Kristen Bell’s huge belly! You see, she was seven months pregnant when all this was going down, which made it kind of hard to film the sex scenes.

“We had to shoot the sex tape and I was seven months pregnant at that time. I had this huge beer belly, this huge gut and I was pretending to act in a sex tape. And now I can forever look at my daughter and go, ‘Oh, you were present for that!’

[Brody] affectionately refers to our sex scenes as our threesomes because my belly was just on top.”

What did her husband, Dax Shepard, think of this? He didn’t give a sh-t. In fact, he was loving every minute of her pregnancy. Bell explained to Conan that her husband told her it felt like he was with a different woman,

Okay then. Good for them. I never knew Kristen Bell was so “open” about her personal life. I guess when you’re sitting next to Conan and his mesmerizing hair, the secrets just kind of flow out of you.