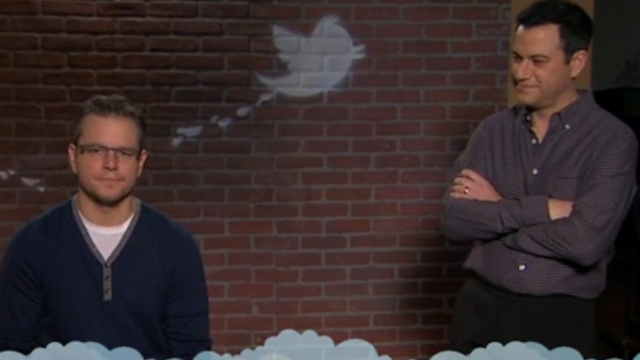 The 6th edition of “Mean Tweets” was released last night on Jimmy Kimmel Live and it was just as hilarious as the previous installments.

In total, 14 stars read mean and nasty tweets they have recieved on Twitter. Jimmy Kimmel set up the video by explaining,

“We like to shine a light on those who post cruel and horrible comments on Twitter. People can be vicious, and it hurts. To raise awareness and to maybe make people think twice before they post something awful, once again we’ve assembled a group of famous faces, including some of our guests tonight, for this, our sixth edition of Mean Tweets.”

You can click the link down below to watch, Jennifer Garner, Tom Hanks, Jon Hamm, Rob Lowe, Joseph Gordon-Levitt and several other celebrities read the craziest tweets they have ever recieved.

What a great way to end a long week. One day, I hope people care enough about me to send me mean tweets and tell me how much they hate my face.

The world is such a loving place.