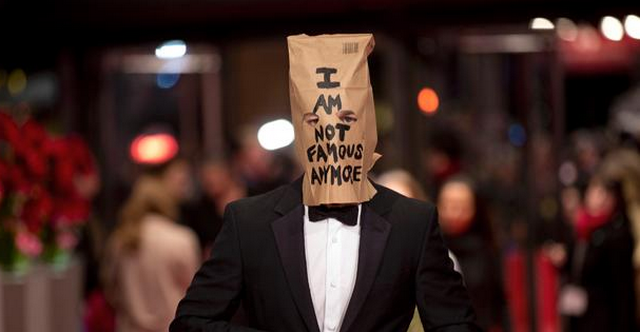 Shia LaBeouf Has Lost It, Wears Paper Bag On His Head To Red Carpet (PHOTOS)

Remember when Shia LaBeouf was paid to act like a goofy kid on Disney Channel? Torturing his big sister and creating havoc all around town with his equally goofy friends.

Those were the good ol’ days, huh? At the young of 27, it appears Shia LaBeouf has actually lost his mind. We all know about his Twitter problems and his fake apologies.

But that’s nothing compared to what he did at the red carpet for his film Nymphomaniac the other day. The 27-year-old actor first walked out of a press conference for the movie earlier in the day. He appeared to get upset when someone asked about the sex scenes in the movie.

And then later in the day, he showed up to the red carpet wearing a paper bag on his head…

Last month, Shia tried to play off his strange behavior as “performance art” but we have our doubts. It seems like he was caught doing something he shouldn’t have been doing, and now he’s trying to play the whole thing off as an act.

Paper bag, peanut butter & jelly sandwich and salty chips to catch all of the jelly oozing out the sides of the sandwich.