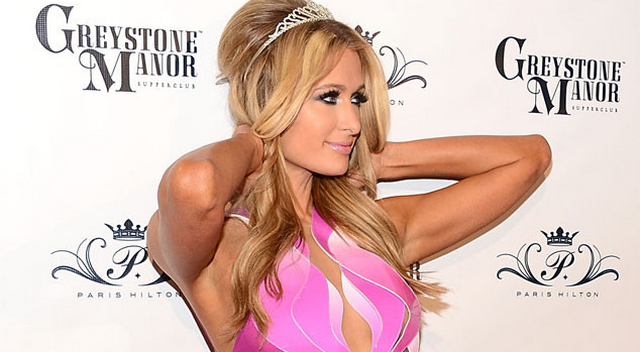 It looks like Paris Hilton is trying to get her name back in the headlines. And since she doesn’t have any real talent, she must strip down to get the attention.

Last weekend, the 33-year-old sex tape star showed up to her birthday party at West Hollywood’s Greystone Manor looking like this… Why the heck did she leave the house without underwear on? It just doesn’t make any damn sense. Although, almost everyone in the world has seen her naked, so she probably just doesn’t give a f–k anymore.

Anyway, apparently she liked all the attention this little stunt got her, so she decided to post a nearly-naked photo to her Instagram account. In the photo below, Paris can be seen in nothing but a thong, boots and a bunny mask. She captioned the revealing photo with, “#BirthdayBunny in her #BirthdaySuit & #JimmyChoos,” It’s been revealed that a photographer by the name of Solmaz Saberi captured the photos.

You know what is strange? Paris Hilton just doesn’t do anything for me. You’ve all read my articles, you know that my mind is filled with impure thoughts. However, nothing really pops up when I see Paris Hilton. And when I say nothing pops up, I mean nothing pops up.

Is it just me? Or has her nastiness ruined it for other guys too?