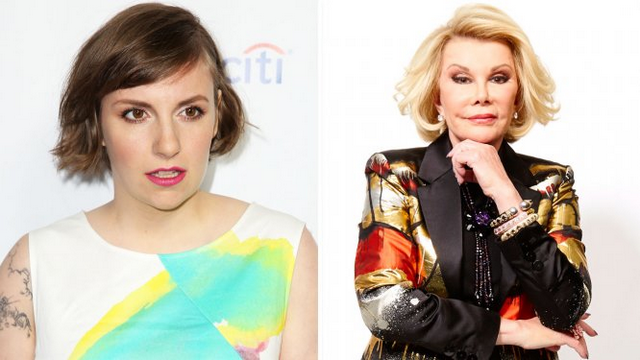 Today is not a good day. The internet is mad, folks. Joan Rivers has pissed off fans of Lena Dunham all over the world with her latest comments on the Howard Stern show earlier this week.

The 80-year-old garbage bag was being interviewed by Howard Stern when she brought up the Girls star’s weight. You can read her full quote down below.

“[Lena is] sending a message out to people saying it’s OK, stay fat, get diabetes, everybody die. Lose your fingers. … I love that she’s funny, I love that she did well … but don’t let them laugh at you physically. … If you look the way you look, Lena, and that’s fine and you’re funny, don’t say it’s okay that other girls can look like this. Try to look better.”

Before you start throwing marshmallows at your computer screen, remember that’s the reaction Joan Rivers wants. She is 80-years-old! She looks like Steven Tyler’s dead grandmother, and she hasn’t made anybody laugh since World War I.

The poor woman wants attention, and that’s the only reason she says the “controversial” sh-t she says. Why else would she claim Lena Dunham was spreading diabetes? She might have “ham” in her last name, but there is nothing she can do about that.

Joan Rivers is old. Really old. She is one fall in the bathtub away from being cremated. Let’s just let her have all the fun she wants now. It’s the right thing to do.