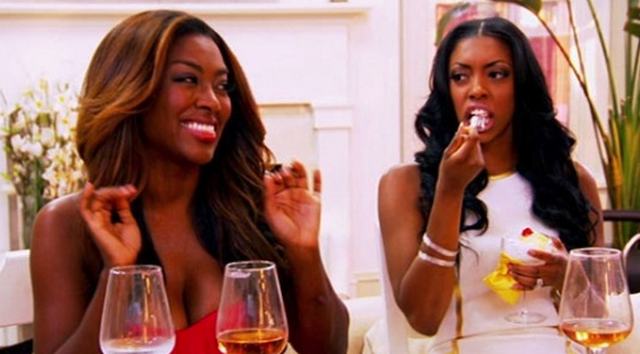 Uh-oh! Things are heating up in Atlanta. Real Housewives of Atlanta stars Kenya Moore and Porsha Stewart got into a vicious brawl yesterday during the reunion special for the show.

An insider told Us Weekly the following…

“They did get into an altercation. Porsha stood up, so then Kenya stood up. Porsha charged at Kenya and pulled her hair, but it was over in a matter of seconds. Porsha never dragged her by her hair. Andy [Cohen] and a producer jumped in and then security came.”

The insider adds that no one was hurt in the fight, but if security hadn’t been there, it could have been a lot worse. One source adds that Kenya is thinking about pressing charges.

As you all know, Kenya and Stewart never have liked each other. Back in November of 2012, Moore called Stewart a “heifer” and “naive” just minutes after meeting her. The feud between the two women heated up during season six when Moore suggested Porsha was Kordell’s “beard.”

It looks like Porsha finally snapped on Kenya! This should make for a very entertaining reunion special.