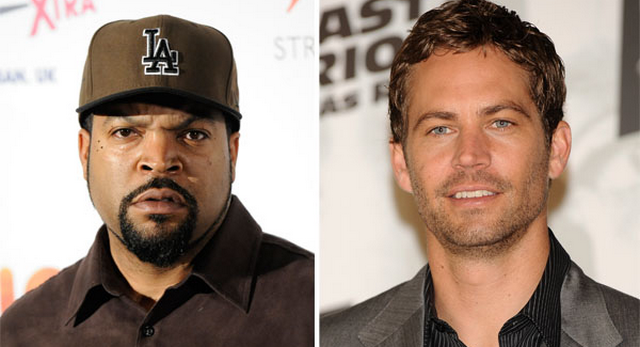 Being in hot water is never fun for a celebrity, and it’s especially not fun when your name is Ice Cube. The 44-year-old rapper/actor got in some trouble yesterday after complaining about being “robbed” of the Best Onscreen Duo award at the 2014 MTV Movie Awards.

As most of you know (or maybe not since no one watched the show) Paul Walker and Vin Diesel won the award for their work in Fast & Furious 6.

Ice Cube disagreed with the voters. He felt that he and Kevin Hart should have won the award for their chemistry in Ride Along.

“We was robbed. Shame on you, MTV. We had the best chemistry of everybody nominated, for us not to win was crazy. We were the best onscreen duo, period. They should have gave it to him before he passed away.”

Obviously his words pissed off some people. For one, it’s the MTV Movie Awards, so it really doesn’t matter who wins. And also, it’s hard to argue Ice Cube and Kevin Hart had better chemistry after one movie than Vin Diesel and Paul Walker did after four.

But as you all know, you can’t judge a quote by its cover. Ice Cube took to his Twitter to clarify his comments…

“Don’t believe the hype. Re: Leaving early from the MTV Awards. They told me our catagory wasn’t gonna be televised. So I left. Just promoting that RIDE ALONG DVD. Re: The sympathy vote: We should honor people before they die. That’s all. Shame on you ‘make something out of nothing’ a** reporters. Smh.

Re: MTV Awards. Ice Cube is not a sore loser. I was born losing. This winning s**t is what I gotta get use to. Last tweet and I’mma leave it alone. Remember this: A lie travels further then the truth. Damn the devil is busy. And Paul Walker fans don’t trip. I was a fan too.”

Ice Cube must be pretty full right about now after eating all those words.