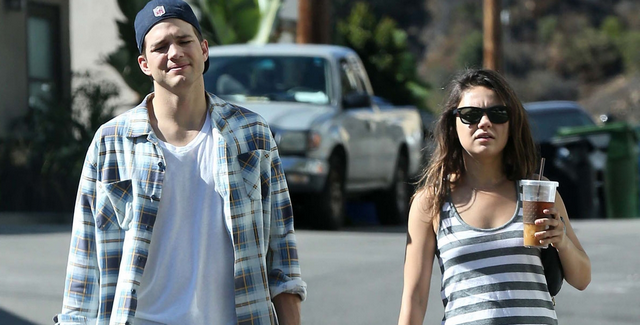 All The Details On Mila Kunis’ Pregnancy: Food Cravings, Workout Routines And The Baby’s Gender Revealed!

For some strange reason Mila Kunis allowed Ashton Kutcher to have sex with her. And even stranger, she allowed him to stick it in without protection. This horrible mistake has resulted in the pregnancy happening right before our eyes.

E! News claims to have the “inside scoop” on all the details of the 30-year-old’s pregnancy. According to E! News, Mila Kunis has been participating in prenatal yoga. She has been spotted going inside a prenatal yoga class in Hollywood. It’s a combination of pregnancy-safe yoga poses, meditation, dance and probably lots of farting.

She’s also a fan of spinning classes. They are great for burning calories, and that’s why she was spotted leaving a spinning class at Blazing Saddles studio just last week. Their website states the following…

That’s nice and all, but what is Mila eating? All this working out, you know she has to be eating something. Well, it looks like Mexican food is doing the trick for her right now. Late last month, Mila and a friend went out to eat at Casa Vega restaurant in Los Angeles.

They ordered fish tacos, guacamole and a fajita salad. And just in case you were wondering, sources say Mila was very friendly to the employees at the restaurant.

There you have it, folks. Yoga, spinning and fajitas! This pregnancy thing doesn’t sound so bad. Oh, and you are probably waiting to find out the sex of the baby, right?

Well, according to multiple sources, Ashton and Mila are expecting a little baby girl!