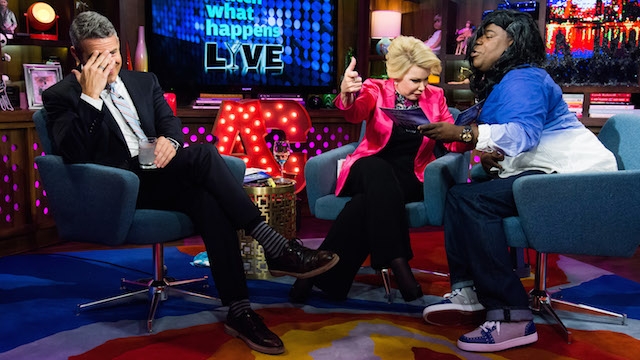 Joan Rivers Slams Another Celebrity, All The Details Inside!

Joan Rivers continues to make the headlines the only way she knows how. She has thrown another bag of insults at another celebrity. Who is the lucky celebrity this week? Gwyneth Paltrow.

The 80-year-old was on “Watch What Happens Live” earlier this week when a viewer called the show. The caller wanted to know about the worst backlash Rivers had ever received from her celebrity beat downs on the terrible show, Fashion Police.

Even at her old age, it didn’t take Joan Rivers long to remember the worst celebrity.

“The worst criticism was, ugh, Gwyneth Paltrow. She came in and yelled at us, but she stood up, she can’t sit down, because she’s got a stick up her rear-end. The ‘World’s Most Beautiful Woman,’ voted by Helen Keller and Stevie Wonder … not my favorite.”

You know, I’d take that as a compliment if I were Gwyneth Paltrow. Stevie Wonder would probably be the perfect judge for a ‘World’s Most Beautiful Woman’ competition. Contestants would actually have to show beauty on the inside, and not on the outside. Something Joan Rivers would certainly fail at.

Like we said, Joan Rivers loves to talk sh-t about everyone. In fact, she just blasted Paltrow last month at LAX when she was asked about Paltrow’s split from her husband.

“Gwyneth is not my favorite person. Maybe if she had eaten a little more, and wasn’t a vegetarian or a vegan, and wasn’t farting, it would’ve lasted.”

What a miserable person Joan Rivers must be. 80-years-old, and she still has so much hate in that old heart of hers. It’s a good thing she has money because there is no way she is finding someone to change her diaper for free.