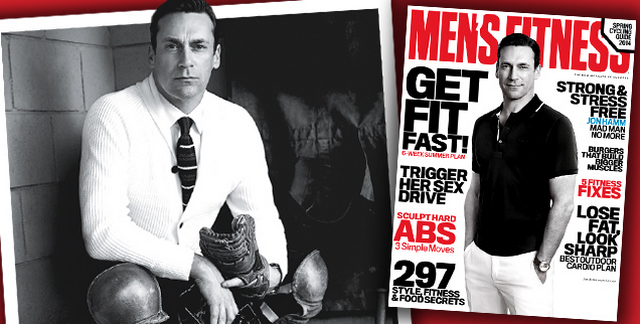 ‘Mad Men‘ star and dating show loser is going to be on the cover of Men’s Fitness’ May issue. Exciting stuff for all you ladies out there, right?

It’s also exciting for Bieber haters because Jon Hamm slammed Justin Bieber during an interview with the magazine. He told the magazine that someone needs to tell these young people in Hollywood to wake up.

“Look at Bieber or whoever. You’re like, ‘What the f**k, man? What are you doing? Why?’ There’s no one telling those people no, and it’s a shame.”

But of course he didn’t stop there. He continued by explaining what he thinks these young stars need.

“[They need] a mom or a dad or a really good friend who can say, ‘Hey, sh**head!’ You see people in the world and you’re like, ‘Do you know how a washing machine works? Do you know how to wash a dish? Life skills are something we’re missing.”

This isn’t the first time Jon Hamm has slammed a celebrity during an interview. You may remember back in 2012 when the 43-year-old star called Kim Kardashian and Paris Hilton “f–king idiots.”

Believe it or not, Kim actually responded to the criticism in a very respectable manner…

“I just heard about the comment Jon Hamm made about me in an interview. I respect Jon and I am a firm believer that everyone is entitled to their own opinion and that not everyone takes the same path in life. We’re all working hard and we all have to respect one another. Calling someone who runs their own businesses, is a part of a successful TV show, produces, writes, designs, and creates, ‘stupid,’ is in my opinion careless.”

We’ll see if Bieber responds to Jon Hamm’s insults. If he does, we doubt it will be as classy as Kim Kardashian’s response. And yeah, that will be the last time I ever refer to something Kim Kardashian did as “classy.”