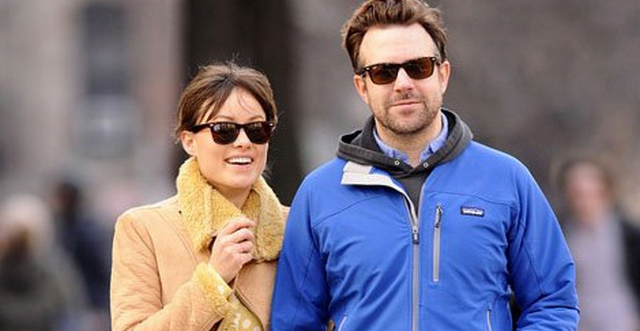 That was fast! Olivia Wilde and Jason Sudeikis welcomed their first son into the world this week, and new mother Olivia Wilde was nice enough to share a photo.

She posted the adorable photo on her Twitter account yesterday. Wilde captioned the photo, “Ladies and gentlemen, Otis Alexander Sudeikis has LEFT the building! (I’m the building)” Aw! Doesn’t that just make you want to get a random girl pregnant? Spend the next 18 years paying child support for a child who hates you because their mother constantly tells them how horrible you are. Being a parent sounds delightful!

Anyway, little Otis Alexander surprised Olivia and Jason by showing up a little earlier than expected. She told Ryan Seacrest back in January that the due date wasn’t until sometime in early May.

The two stars got engaged back in January of 2013. Just recently, Olivia Wilde told Lucky magazine that she feels no pressure to get married before the baby arrives.

“It’s certainly not something I feel pressured to do before we have the baby. I’m such a believer in marriage and I [already] think of him as my husband anyway.”

Well, congratulations to the new parents! If there is one couple in Hollywood I want to see “make it” it’s the Sudeikis/Wilde combo.