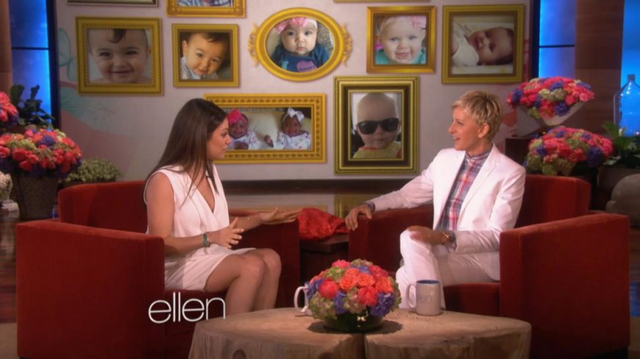 For the most part, Ashton Kutcher and Mila Kunis have managed to keep their relationship private, which is quite the accomplishment considering how popular the two stars are.

However, Mila decided it was time to share some news about her pregnancy and engagement on The Ellen DeGeneres Show recently. The 30-year-old actress talked all about her personal life during the interview. She wouldn’t reveal her due date or the baby’s gender, but she did say they are planning a natural birth.

“We watched a couple of documentaries and we looked into the like the midwife aspect of it and things and spoke to my OB/GYN and realized that the hospital that I’m going to be laboring in does a midwife, you know, doula type of thing, and so I’m gonna do it as all natural as I possibly can unless that there’s an emergency or something that should wrong.”

She also talked about the incredibly strange pregnancy cravings she has been having lately. Most women crave Mexican food or chocolate, but Mila Kunis is all about that sauerkraut.

“I’m very stereotypical. I eat sauerkraut all day long. Here’s the truth. This is the worst craving to have because sauerkraut smells and so every time you open up a jar it just reeks in the whole kitchen…It’s not like ice cream where everything smells lovely.”

So, I guess we need to talk about Ashton Kutcher now. It’s difficult to admit, but he did play a major role in the making of this baby. Mila claims he has been great during the pregnancy.

Ashton has been taking classes to learn Russian for six months now, so he can speak Russian to their baby.

“Yeah, he’s been taking classes for probably like six months now. He does it twice a week. A woman comes to the house to give him lessons. It’s really, really great.”

We have to admit, that’s pretty cool. They are going to make great parents. It’s not often you can say something like that about a Hollywood couple, but you can just tell Ashton and Mila are going to rock it.