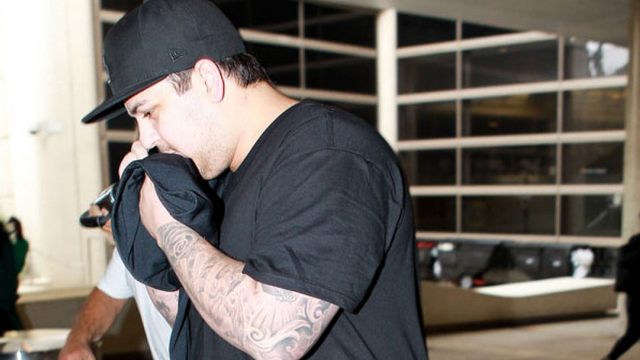 As most of you probably know, Rob Kardashian skipped out on his sister’s wedding at the last minute. It was first reported that his family was giving him a hard time about not losing any weight before the wedding; however, that’s just not true.

The only person who had a problem with his weight was Rob himself. He was apparently embarrassed by his weight, and he didn’t feel comfortable being in the wedding photos. The 27-year-old decided to ditch the wedding. Sources say he skipped out right before the rehearsal dinner, and then flew home in tears. Apparently, Kim and the rest of the Kardashian family were heartbroken. They felt terrible knowing Rob was going through so much pain.

TMZ is reporting that Rob is now trying to turn this embarrassing situation into motivation. He’s reportedly determined to lose weight, and he’s ready to workout every single day of the week.

Rob’s trainer, Gunnar Peterson, told TMZ he received a text from Rob as soon as he arrived back from Italy. According to Gunnar, the text was very clear. Rob wants to get his old body back.

Peterson told the gossip site that he will show the reality star no mercy. He will hit him with intense workouts, especially high-intensity cardio routines.

Good for him! It’s a shame he had to miss his sister’s wedding, but maybe it was good for him. He obviously wasn’t taking his workouts seriously before, so maybe this was the push he needed.

Don’t let the haters get you down, Rob!