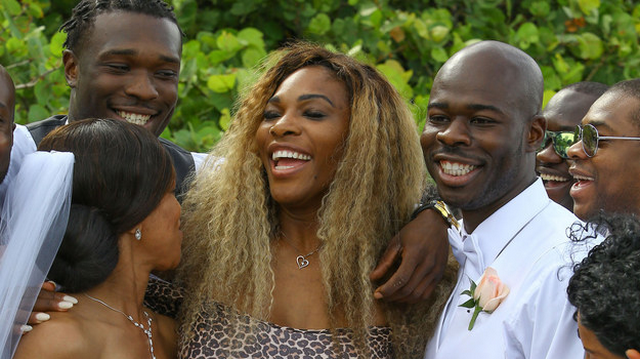 Serena Williams just pulled off one of the greatest wedding crashes of all time. The tennis star noticed a beach wedding happening in Miami on Saturday afternoon, so she decided to stop by and pose for some pictures.

Sources say she was with her friend, Caroline Wozniacki, enjoying some free time on the beach. The two tennis stars had just finished watching the Miami Heat beat the Indiana Pacers the night before.

Pretty cool, right? But this photo is not nearly as awesome as the photos she took with a random bride and groom on a beach in Miami.

How difficult do you think it was for the groom to avoid looking at that big ol’ booty? Serena Williams could have easily caused one of the fastest divorces, ever.

These celebrities better be careful with crashing weddings. One day, the couple isn’t going to have a clue who the person is. Can you imagine how awkward that would be?

Have this guy show up at your wedding… Groom: Who the f–k are you?

The groom turns to the bride.

Groom: Hey, honey. Do you know this guy?

Grandma Perkins: I think he might be Uncle Peter, you know, from Chicago!

Bride: Oh, yeah! Uncle Peter! How have you been?