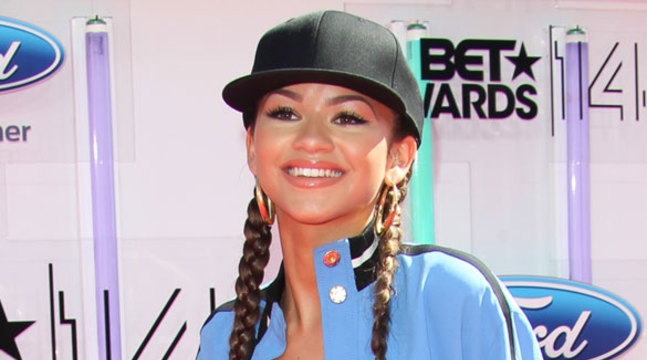 Zendaya Coleman withdraws from the Aaliyah project, Production was not up to Par!

Well she said it was “half” to be exact.

Back on June 16th when it was announced that Coleman would play Aaliyah in the Lifetime biopic, the internet went buzzing.  The 17 year olds likeness to Aaliyah made her perfect for the role, the project had a working title, Aaliyah: The Princes of R&B and things were under way……sort of.

There was immediate backlash from the internet when Aaliyah fans said that Coleman was not black enough?  The Executive producer, Debra Martin Chase stood by her decision swinging back at the haters. She said, [more…]

“Honestly, I think it’s ridiculous. What does that mean? What does it mean to be black enough?” I’m African-American. What does that mean? She’s biracial, but she identifies as black. She has a very strong black father. It’s very narrow and short-sighted. It’s not the world we live in today. And she, like you, like all of us, encompasses all her cultural experiences and heritage. And most importantly, she physically resembles her.” AND THEN: AALIYAH’S FAMILY NOT TOO HAPPY THEY TRIED TO SHUT [email protected]#T DOWN!

Aaliyah’s family was not that happy with the entire project.  In an interview with The Daily News, Aaliyah’s cousin Jomo Hankerson (yes…Jomo), said they wanted a Tina Turner type of big budget movie, not no Lifetime crap.  He said,

We want a major studio release along the lines of ‘What’s Love Got to Do with It,’ the Tina Turner movie.  This needs A-list actors, A-list talent that can breathe life into what we think is a phenomenal story.”

To be clear however, there was no objection to the biography being based on the book by Chris Farley entitled, Aaliyah: More Than a Woman,” which had details of her marriage to R. Kelly.  They also had no issues with Coleman playing Aaliyah, they had a problem with the scale.  It was just not large enough of a production.

I don’t have a problem with her.  It’s never been about the actress. The problem that we have is that Aaliyah was an icon and she deserves an iconic tribute, not a Lifetime movie.”

SO WHY DID ZENDAYA COLEMAN PULL OUT OF THE AALIYAH PROJECT?

I think she was in agreement with the family.  She felt that the project needed to be bigger, better organized, and worthy of Aaliyeah..  During the BET awards, she explained her decision to reporters.  Coleman stated,

Basically, I just felt that because I love her, and because I respect her so much as an artist, I don’t want to do anything that’s half or anything that’s less for her.”
“I felt like some things with the production weren’t all the way there, the project wasn’t all the way there,” she continued, “If I’m going to do something for someone I care about so much, I have to do it the right way.”

Sounds like she was drinking some Jomo Kool aid.  But I kind of agree.  A Lifetime biopic does not get respect it should and is quickly forgotten about.  Do you remember the uproar that was made when Little Mamma was chose to play left Eye in the VH1 biopic about TLC.  Nobody even watched it…and those who did forgot about it.

YOU CAN MAKE A MAJOR MOTION PICTURE ABOUT HER DEATH ALONE On August 25th 2001, she died in a plane crash in the Bahamas. There were so many factors involved in her death it’s a movie in itself.  The plane had 1 too many passengers, the pilot was not approved to fly that type of plane, he had falsified training records, the pilot had both cocaine and alcohol in his system and there was too much luggage on board.

Aaliyah and eight others died on the plane.  Although Aaliyah her suffered from severe burns and a blow to the head the coroner said she was in such a severe state of shock that even if she survived the crash recovery from the shock alone would be nearly impossible.

That sounds like a major motion picture to me, produced by Spike Lee, directed by Hype Williams, starring Denzel Washington, Angela Bassett, Keri Washington, and of course Sam Jackson.  I don’t know who they will play, but that would be a hell of a cast.

Kudos to Zendaya for putting quality over quantity.  With this kind of caution in choosing her roles, she will have a long successful career….but the show must go on.  I wonder who will be picked next???

Currently the entire project is on hold while they search for a replacement.