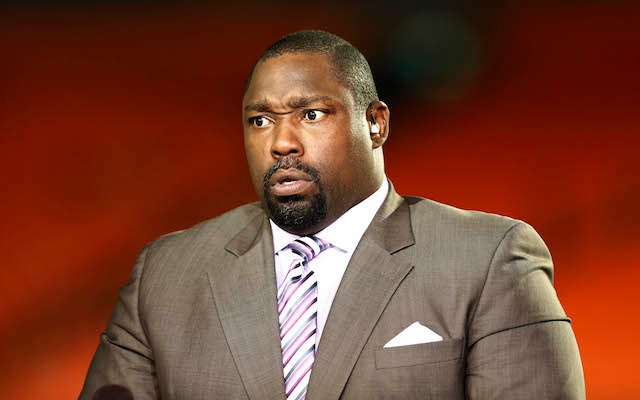 Warren Sapp Explains himself after Waitress puts NO TIP receipt on Blast!

After a receipt hit the internet where the former Football  star did not tip the waitress, we now know why.  I’m not saying I necessarily agree with it….or disagree with it, but at least we know why?

WHAT HAD HAPPENNED WAS…..

Tuesday, Warren was ready for some USA World Cup action.  He and his boys decide to hit the sports bar, so they go over to the Upper Deck Sports Bar and Grille, order some wings and brews and watch Tim Howard do work.

In case you want to know just what a 6’2”, 300 lb man orders before watching a game, Sapp had: Soup, Chicken wings, a Reuben sandwich and a bucket of Heinekin.  That left him with a bill of $69.39. Of which our buddy left no tip.  Nothing, Nada, Zilch!  GOOD DAY SIR!

When Sapp did not tip the waitress, a copy of the receipt showed up on the internet with a note that said, “Boys don’t tip”. [more…]

The waitress said that she sent it privately to her sister, who she says later posted it publically online.  Just to make things a little more viral, sport reporter Darren Rovell got a hold of the picture and sent it out to his 478,000 followers.

That’s when Sapp, who is overly sensitive to money issues, swooped in on Social media to defend himself.

@Alex_Iwanowicz She kept calling us boys so the tip Fit!

AND THE WAITRESS SPEAKS!

The 26 year old waitress, Corey D’Agata appeared on 940 WINZ radio in Miami, with host Any Slate and provided her side of the story.  She said that she did nothing wrong.  She said she called him “Boy” once and that was it.  She explained the encounter, Personally, I think Sapp overreacted.  A 26 year old was not around in the times where black men, were called “Boy” as a way of demeaning them.  Michael from Good Time would say, in every other episode,

Combine that with Warren Sapps’ money issues including his 2012 bankruptcy filing and the auctioning off of his Nike collection last year and Celebrity net Worth has him valued at -$1 million; I think Sapp was being a sap!  I say have a little class and tip the girl.

The good part is, it appears that Corey will not lose her job.

TIDBIT: Sapp made an estimated $40 million during his football career, and in 2012 he was $6.7 million in debt.