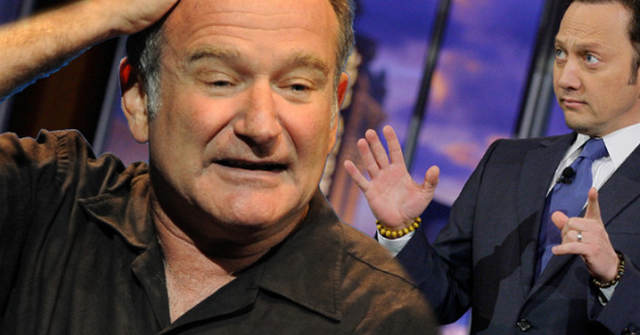 Rob Schneider Has Interesting Theory About The Death Of Robin Williams

Comedian Rob Schneider, who was friends with Robin for over 20 years, believes he knows why his friend committed suicide. He went on his Twitter last week to call out the “evil pharmaceutical industry.” He thinks Robin’s suicide could be linked to a medication he was taking to treat Parkinson’s disease.

Check out his controversial tweets down below… Of course, he did receive a lot of hateful messages after posting these tweets. He responded to the “haters” by calling them, “Big Pharma Trolls.”

As most of you know, Williams’ wife revealed that her husband was dealing with the early stages of Parkinson’s disease before he took his own life. She also insisted the actor was sober at the time of his death. She wrote the following in a statement released after his death…

“Robin’s sobriety was intact and he was brave as he struggled with his own battles of depression, anxiety as well as early stages of Parkinson’s Disease, which he was not yet ready to share publicly.”

I’m not sure why people are getting so mad at Rob Schneider. A lot of people feel the same as him. Did prescription drugs have anything to do with Williams’ death? Who knows. It is a bit irresponsible of him to automatically blame this particular death on prescription drugs; however, he does bring up an interesting point. Too many people die from prescription drugs, and it’s certainly a bigger problem than most people realize.

At the end of the day, I understand where Schneider is coming from. He just lost his friend, and he’s grieving. We all do it in different ways.