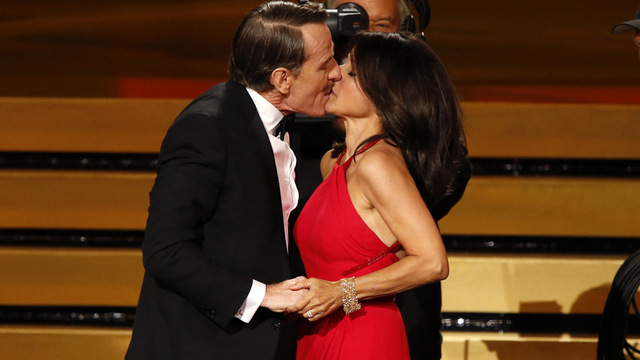 Everything You Need To Know About The 2014 Emmys In One Post!

Do you like to watch TV? Do you have a list of favorite shows you think deserve an award? Do you not have three hours to waste watching actors, writers and directors thank the Academy? Well, you have come to the right place!

The 66th Annual Primetime Emmy Awards took place last night, and Beyonce was not in the building, so it wasn’t quite as magnificent as the VMAs. However, there were a few special moments last night, none of those moments including the vanilla Seth Meyers.

It’s not that Seth Meyers was particularly bad as host, it’s just he wasn’t anything special. He was a safe choice.

One of the funniest moments of the night actually came from Bryan Cranston and Julia Louis-Dreyfus. The ‘Veep‘ star was about 10 seconds away from taking a full on mustache ride. As some of you may remember, Bryan played Julia’s love interest on Seinfeld many years ago. Julia pretended not to remember the passionate kiss they shared on screen, so Mr. Cranston decided to jog her memory with this hot make out session.

Of course, the most touching moment of the night was the tribute to Robin Williams. Billy Crystal shared a few charming stories about his longtime friend.

“He was the greatest friend you could ever imagine. It’s very hard to talk about him in the past, because he was so present in our lives…He was the brightest star in the comedy galaxy.”

They ended the tribute with a few clips of Robin Williams at his best. It was a special moment, and a great way to remember an amazing person.