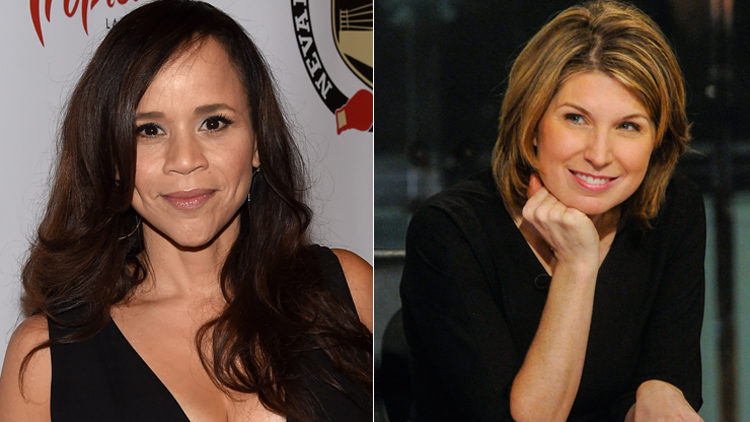 Well, all the speculation can finally end. “The View” has made their final selection and like it or not, Rosie Perez and Nicolle Wallace will be joining Whoopi and Rosie O’Donnell to round out the panel. Two Rosies….Go Figure. Those two couldn’t be more opposite which ABC hopes will make for some very interesting television.

There were rumors of a male co-host with Arsenio’s name leading the pack but that talk can be put to rest now.

The new “View” will debut on September 15th and with it, will be more than just new co-hosts. The show will have a new studio, a new set and even a new color scheme and logo. It will also have what they are calling an “on camera social media station”. [more…]

Bill Getty has been replaced as executive producer by Bill Wolff. Wolff was the executive producer of MSNBC’s “Rachel Maddow Show” and was also the vice president of primetime programing. It was rumored that Wolff was looking for a strong Latino presence as well as a Right wing influence. He has both of those with Perez and Wallace. Perez is known for being Latino(seriously) and Wallace is known for being a right wing commentator. Wolf seemed very pleased with himself thus far. He told the press after the announcement,

“These are powerful and accomplished women from different walks of life who have had amazing personal and professional experiences. Each brings incredible perspective and information to the table,”

I predict initially high ratings, but the question is, “will they continue?”. After 18 years such a radical change might prove to be just what “The View” needed, or will it be a nail in the coffin for the talk show. We shall see on September 15th.