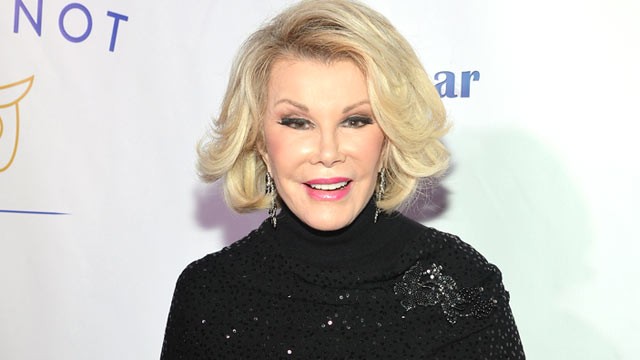 The media has been expecting this news since last Thursday. You can tell by how fast they published these long articles in memory of the legendary comedian. I didn’t have anything prepared for two reasons. The first reason being I am very superstitious and if I started writing about her dying before she actually died, I would spend the rest of my life thinking I contributed to her death.

The second reason? There was a Cops marathon on the other day and I got distracted for almost 29 hours. Anyway, enough about me, let’s talk about Joan Rivers. The controversial “Fashion Police” co-host stopped breathing during a routine throat procedure back on Aug. 28. She was rushed to the hospital, and sadly she never woke up. She was placed on life support and moved in and out of the intensive care unit at Mount Sinai hospital.

It was announced yesterday afternoon that she passed away. Melissa Rivers released the following statement…

“It is with great sadness that I announce the death of my mother, Joan Rivers. She passed peacefully at 1:17pm surrounded by family and close friends. My son and I would like to thank the doctors, nurses, and staff of Mount Sinai Hospital for the amazing care they provided for my mother.

Cooper and I have found ourselves humbled by the outpouring of love, support, and prayers we have received from around the world. They have been heard and appreciated.

My mother’s greatest joy in life was to make people laugh. Although that is difficult to do right now, I know her final wish would be that we return to laughing soon.”

The clinic where Joan Rivers attempted to have her throat procedure is being investigated. “We will be investigating the death of Joan Rivers.” The New York City Medical Examiner told CNN. The funeral for Joan Rivers will take place on Sep. 7 at Temple Emanu-El in Manhattan.

We’ll leave you with something Joan said in a brilliant profile piece published in New York Magazine back in 2010.

“All I want you to do, if we are sitting down and it’s after 6 p.m., is tell me the truth. Because we’ve all lied to each other all day long in business and we’ve all had these lunches and we’ve all ass-kissed to the point where I carry Chapstick. If I am going to sit down and eat with you, just tell me the truth and let me say to you, ‘Things are lousy and I’m sad.’”