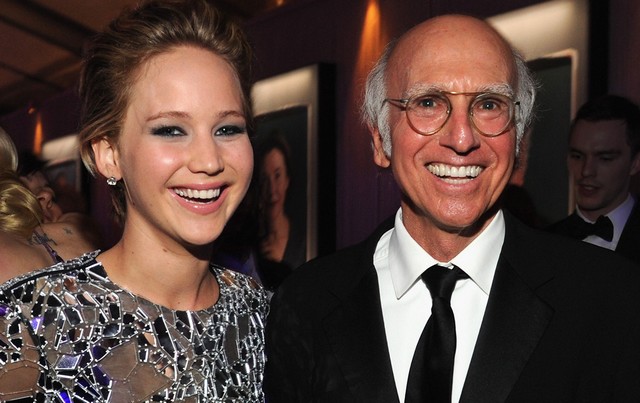 Larry David Receives Word That Jennifer Lawrence Has The Hots For Him: New Couple Alert? We know that the 24-year-old Jennifer Lawrence was rumored to be in a relationship with the 37-year-old Chris Martin. A 13-year age difference isn’t that big of a deal, especially not in Hollywood.

But what about a 43-year age difference? Would anybody support that? As you all know, Jennifer Lawrence was on the cover of Vanity Fair recently. During the profile article on her, she admitted to having a huge crush on the 67-year-old Larry David. And by huge crush, we don’t mean that she’d like to be his friend and go shopping for comfy sweaters with him.

She wants to get Larry David in bed. She said the following during the interview…

“I’m in love with him, and I have been for a really long time. I worship Woody Allen, but I don’t feel it below the belt the way I do for Larry David.”

Well, during the New Yorker Festival, Larry David was asked what he thought about Jennifer Lawrence’s crush on him.  “Smart kid. It’s a shame that I’m about 40 years older than she is.” He replied.

And then a reporter read the “below the belt” part of the quote.

“Maybe she’s referring to her knees. I don’t think I could do it. On one hand, it’s very flattering and on another hand, it’s kind of a shame—in terms of timing. I’d have fun watching the reality show of it, though.”

Can you imagine how much money someone would pay for a Jennifer Lawrence/Larry David sex tape? I am getting a boner just thinking about it. It could start off with Lawrence polishing his head, and then he’ll whisper in her ear, “You know…I do have another head in need of some attention.”